Note: This is first in a two-part series, cross-posted with permission from The Disgruntled Haradrim. Check on Part 2 about Anti-Fascism and  Ethiopia on Wednesday! 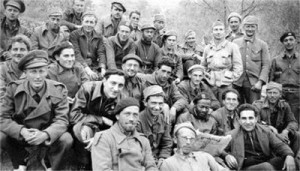 I was watching Guillermo del Toro’s excellent dark fantasy realism flick, El laberinto del fauno (Pan’s Labyrinth) the other day, and it reminded of an excellent blog article I read on Emma Goldman and dieselpunk late last year. Huh, you ask? Yes, like a Third Stage Guild Navigator, my mind “moves in strange directions.” Stay with me, and I’ll connect the dots….

Guillermo del Toro’s tragic tale, told through the eyes of an imaginative little girl named Ofelia, is set during the brutal Franco regime in the wake of the Spanish Civil War (1936-39), a conflict that is almost lost in the long shadow cast by WW2. Yet like Mussolini’s brutal campaign against Ethiopia, the Spanish Civil War was one of the first battlegrounds against fascism. While Nazi Germany and Fascist Italy supported the right-wing General Francisco Franco, with weapons and bombing campaigns, the leftist Republican government was supported in part by France, Mexico and the Soviet Union.

Beyond nation-states, brigades of international volunteers also flocked to fight what they saw as a war against fascism. Some forty thousand men and women from fifty-two countries, many of them socialists, communists and radicals, traveled to Spain to join the International Brigades in support of the anti-fascist Republican government. Some 2,800 of them were from the United States, and served in what was called the Abraham Lincoln Brigade.

Composed of regiments with such names as the George Washington Battalion, the Abraham Lincoln Battalion and the John Brown Anti-Aircraft Battery (that last one is too righteous!) the group was composed of people from varied walks of life, men and women and (surprising for its age) multiracial. Among them were a good number of African-Americans, who identified with the leftist Republican government’s fight against fascism:

For many African-Americans the struggles at home against oppressive racism, lynching and anti-black mob violence, was one in the same with these foreign struggles against fascism–be it in Spain or Ethiopia. One of these black volunteers was Salaria Kea, who at the age of 23 traveled overseas to serve in a medical mission in Spain for the leftist brigades; she would tour throughout the US during the war, pleading the cause of the anti-fascist struggle. Other African-Americans would serve as soldiers and even commanders of battalions:

The lynching of Negroes in America, discrimination in education and on jobs, lack of hospital facilities for Negroes in most cities and very poor ones in others, all this appeared to them as part of the picture of fascism: of a dominant group impoverishing and degrading a less powerful group. The open pronouncements of Germany and Italy against all non-Aryans is convincing evidence. Thinking thus, hundreds of Negro men went to Spain. Here in the international Brigade of Volunteers they found other Negroes. From Djibouti, Emperor Haile Selassie’s chief mechanic came to strike a blow for a free Ethiopia.’ From South Africa, from Cuba, from French Senegal, from Haiti, from the Cameroon’s, Negroes came, stayed and fought.–excerpt from A pamphlet issued by the Negro Committee to Aid Spain with the Medical Bureau and North American Committee to Aid Spanish Democracy, New York, 1938. Reprinted at the Abraham Lincoln Brigade Archives.

Emma Goldman, the prominent American radical, was sixty-seven when the Spanish Civil War broke out, and saw in the struggle the hopes for an anarchist revolution. Though too mature in years to physically join the fight, like Paul Robeson and other notable figures, she fervently supported the anti-fascist cause. In 1936 the Spanish Republicans drafted Goldman for their English propaganda campaign, a role which she relished, writing hundreds of letters in their support. Even after Franco’s 1939 victory, Goldman spent the final year of her life fighting for refugees who faced murderous persecution by the pro-fascist regime.

This all leads to an excellent article written by Steampunk Emma Goldman this past December, which questions the disturbing trend in dieselpunk of borrowing fascist uniforms as part of the genre’s fashion:

If you’ve been in the steampunk or dieselpunk subculture for any lengthy of time, chances are you’ve encountered what I think of as steamnazis. You know what I’m talking about. Their costumes range from full-on SS uniforms with goggles thrown on, to fascist-inspired, somewhat fetishistic uniforms with vaguely ominous made-up insignia. My reaction to them ranges from a brief moment of involuntary fear, followed by intense discomfort, disgust, and outrage, to a vague sense of wishing I, or they, were somewhere else. Their reactions to being confronted with my, or others’ discomfort, has ranged from vehement, vocal defense of their costumes to frank, apologetic, and respectful apologies and the removal of offending Nazi insignia.

This of course isn’t the totality of diselpunk, which also embellishes their fashion with Allied military uniforms from WW2. Yet the Nazi or SS uniforms are common enough in the subculture, where they’re usually described as “hip” and ”cutting edge” or even “sexy.”  Still, it’s a trend that’s always eerie to behold, perhaps as eerie as the Nazi fad in some cosplay–but that’s for another time and another blog. Those who wear such clothing often use the defense that it’s just make-believe, which has become speculative fiction’s default hypocritical reply in such instances: we gush proudly when the genre is shown to have serious, intellectual, political worth, but out of the same mouth will dismiss any controversy with the claim, “it’s just all fun–stop taking it so seriously.” Steampunk Emma Goldman makes an excellent point about placing these matters in historical and social context, and suggests a great alternative to romanticized fascism–using the costumes and depictions from the anti-fascist volunteers of the Spanish Civil War:

We all know a lot of people fought against various fascist armies in World War II. I’m not here to tell you to put on a British, American, or Soviet uniform instead of a German one, though. There are more interesting alternatives. Interesting, not just in terms of costume, but in terms of the potential backstory you can have for your persona, if backstory and persona is a thing you do. . . . [These people] come from many different countries, and many different ideologies. Some believe in anarchism, some communism. Some are believers in Western democracy. Some are Christians, some are Muslims, some are Jews, some are atheists. What they all have in common is that they risked their lives to take a stand against the rise of fascism. . . . yes, I personally think it’s cooler to dress up as an anarchist than to dress up as a fascist. Not that I think people must always present themselves as heroes rather than villains, but I think the role of anarchists in history is frequently misrepresented and ignored. Plus, this is a chance to create an alternate history. One where the anarchists and the communists won in Spain. OF COURSE I want to see people do that!

There you have it–alternate history with a radical dieselpunk kick! There’s more than enough diversity and inspiration there to keep seamstresses busy for a while. And it makes a statement that dressing as a fascist is not somehow inherently “cool” because its dark and chic. Check out Steampunk Emma Goldman’s blog, for dieselpunk costumes inspired by the anti-fascist volunteers of the Spanish Civil War. Some other time I’ll go into Steampunk’s fetish for the Confederacy of the American Civil War, and perhaps suggest some alternate history uniforms of the 54th Massachusetts Nat Turner Brigade . . . .

P. Djeli Clark, aka The Disgruntled Haradrim, is a writer, blogger and fan of speculative fiction. You can find his ramblings at his blog. A few of his literary works are scattered among the e-zines of the virtual world; most are sitting in someone’s slush pile. You can also follow him on Twitter at @pdjeliclark.

One response to “Anti-Fascist Dieselpunk and the Spanish Civil War–Guest blog by P. Djeli Clark”