I have several exciting contributions in queue for April, so pardon the delay here on the blog.  In the meantime, other things have happened!

Firstly, I already mentioned it on Facebook & tumblr already, but I’ve been nominated twice for 2013 Steampunk Chronicle Reader’s Choice Awards. Last year, I was honored to win four awards and that was enough ego-bloating for one year. XD  Again, thank you, Dear Readers, for thinking of Beyond Victoriana’s work for a second year in a row.

This year, I’m up for both Best Multicultural Steampunk and Best Politically-Minded Steampunk. My fellow nominees — Magpie Killjoy (better known as the founder of Steampunk Magazine), Balogun Ojetade, Steampunk Emma Goldman, and Jeni Hellum — have also done extensive work in their own right too, and I’m pleased to see the community recognizing the growing number of influential steampunks who are doing things that can impact the substance of our subculture. I encourage you to check out all the nominees and cast your vote before April 12th.

This weekend, I will also be heading out to Pennsylvania for Steampunk@Gettysburg with The Copper Claw. For this convention, I’ll be putting down the PowerPoint and taking up  my bow and arrows as a performer and not an educator (though I’d still be educating too, I think. Like in stage combat. Or shooting imperialists for fun and profit. That sort of thing.)

More details about my schedule & other news after the jump.

Friday at 8PM: The Percs of Being a Merc
Description: Lucretia Dearfour talks about The Copper Claw organization in character.  The presentation is audience interactive and is run similar to a recruitment agency for lowlives and thieves who want something more out of their work.  We will talk about the perks of being a Mercenary, stories from the field, and the illustrious background of The Copper Claw as an notorious crime syndicate.

Saturday at 4PM : Stage Combat Workshop
Description: This is a hands on presentation by Lucretia and a number of other Copper Claw members to teach beginner stage combat.  Whether it’s for a Masquerade skit or for Hallway Shenanigans one should NEVER try stage combat without first learning how to do it safely and effectively.  In this we will demonstrate and educate how to try a number of proper slaps, kicks, and many other stage combat basics to ensure no one gets hurt (but it looks like they do).  Lucretia and a number of the other instructors were trained in Stage Combat at Fitchburg State College.

Sunday at 12PM: The Copper Claw vs. The Garment-Eating Microbes Radio Play
Description:  On the planet Glade Lucretia and Ayleen, members of The Copper Claw, have been left for dead after a deal gone wrong, and must match wits with creatures that eat the clothes right off of their back!  How will Lucretia and Ayleen get out with the shirts still on their backs?!  The Copper Claw Vs. The Garment Eating Microbes, is a mash-up of the 1956 radio-play “X Minus One: Student Body.” The best part is we’ll pick members of the audience to round out the cast! Worried about bringing the kids?  Don’t worry, there’s about as much as nudity as a normal ’50s radio drama.

At the end of April, I will be attending the Steampunk Empire Symposium for a second year in a row — this time as their Academic Guest of Honor.

Another convention that I want to support here (that I can’t go to, sadly, but YOU should) is the Air City Expedition.

There are a brand-spanking new convention, created out of the desire by the New England community to have a convention with Steampunk Industrial Revolution closed its shutters. On their website, they describe ACE as:

Air City Expedition is a Steampunk convention that began out of a need to start a convention where one was lost. It’s producer, Amy DesChenes, charged forward to hold the flag of the NE Steampunk Community so it would not fall to the ground, when  Steampunk Industrial Revolution ended in their 3rd year. Although this convention has been only 2 weeks in the making, it has the support of Eric Jon Larson of Teslacon, Watch City, The Secret Swan Society, The Vagabonds, Antiford, and the  HMS Hysteria and all committed NE steampunks who are ready to pull together and do what they can to make this an amazing example of what working together can accomplish! Please join us in making this happen. There’s a place for everyone to help. We need you all. This is your con…

And to round-up my extensive plugging for this week, there are a couple more projects that are worth investing in– 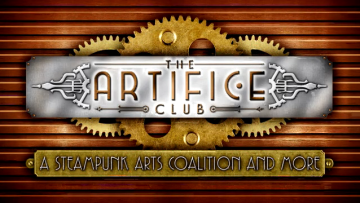 The Artifice Club of Atlanta is looking to expand their support to artists in the community.  In order to do that, they want to go legal. That’s right — The Artifice Club is applying to become a 501 (c)(3) arts org, but they can’t do that without your help. They’ve had a very successful Kickstarter campaign, but every extra bit will go toward creating wonderful events that will jump start their new status. There’s still time to donate!

Allegra Hawksmoor, former editor of Steampunk Magazine, is also starting a new project: Dreampunk. Focused more on the Romantic era of the 19th century and more influenced by the fantastic and the occult, the Dreampunk manifesto on their website describes it as:

Dreampunk is the rediscovery of wonder and beauty in an age of collapse, conformity and decay. It seeks a modern Romanticism: embracing the ideals of love, liberty, equality and freedom, whilst utterly dismissing the systems of colonial and patriarchal wealth and the privilege. It shuns those who hide themselves away from the processes of life and death, and instead embraces the raw spirits of creation and destruction.

Dreampunks seek to find the extraordinary within themselves and their own locus in place and history. We are explorers of the wilderness and urban wastelands alike: psychogeographers who are deeply connected to wherever we happen to be standing, and whoever we are standing with. Dreampunks blur the line between the real and unreal: experimenting with ritual, the occult, and the transformative as ways of understanding our journeys through life. We work to reunite reason with emotion: rejecting those who dismiss overwhelming evidence in the face of personal bias, or those who refuse anything that is deeply felt and understood simply because it cannot be explained.

Our work strives towards the creative empowerment of the normal, and you may find us amongst midwives, makers, gardeners and blacksmiths—working together as true equals in a world that hoards power amongst the few. We make, reuse, repair and recycle what we have, because we understand the true destructive power of planned obsolescence upon our spirits and surroundings. Our hands are in the bare earth of our permaculture gardens, and we are out there in the wilderness: beneath a canvas sky with a firesteel and waterskin, seeking to leave only footprints in the mud behind.

Dreampunk is now open for submissions and especially would like to hear  “the voices of people of colour, women, those who are gay, queer, transgender and genderfluid, the elderly, poor or homeless, dominant and submissive, disabled, and people who are managing mental illness.” Their deadline is June 1st.