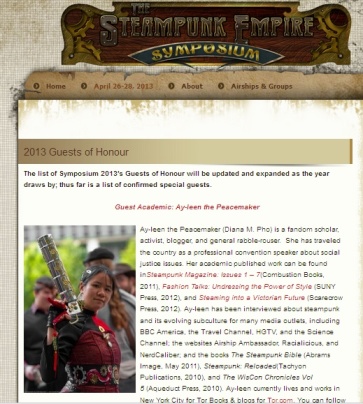 Already have my bags packed for my early morning flight to Cincinnati for the Steampunk Empire Symposium. My schedule is under the cut — hope to see some of you guys there!

Steam Around the World: Steampunk Beyond Victoriana
Ay-leen the Peacemaker
Beyond Victoriana, what steampunk possibilities exist? Come join us as we take you on a trip around the world to see how steampunk manifests in the minds of those who don’t think within an Eurocentric context, whether they blend Western influences, or use recognizably steampunk elements within a distinct flavor outside of Europe. We will also approach the ethical challenges that come up when engaging in multicultural steampunk and discuss matters of race, privilege, and cultural appropriation.

Steampunk Reader’s Choice Awards
I’ll be making an appearance there and be representing several others who could not make it to the ceremony. Plus, I have a sekrit video up my sleeve from Lucretia Dearfour herself — if you have been following her antics impersonating other steampunks during the past few weeks, you’ll be in for a treat!

Envisioning a Better Steam Society: Social Issues & Steampunk
Ay-leen the Peacemaker
A discussion panel where panel participants discuss their thoughts about finding aesthetic inspiration in a historical era rife with sexism, racism and classist thinking. Can the steampunk subculture come to terms with its problematic past, or are we just repeating history, except with ray guns? Together with the audience, we hope to engage in an open dialogue about whether steampunk confronts or condones the historical ideas behind its inspiration, how nineteenth century thinking is re-interpreted in the present day, and what makes steampunk actually “punk.”

Minority Groups and Alternative Cultures
Ay-leen the Peacemaker
This panel is aimed at encouraging honest and open discussion of ethnic tensions, cultural differences, and incidents of racism in alternative subculture spaces. With the audience, we will talk about why minority groups may shy away from alternative-culture groups and events, any relevant examples of causes that you might wish to share, either in observation or as a minority, and about how these differences can be resolved in order to create a safe space for ALL people present in these types of groups or events.

LGBTQ in Science Fiction and Fantasy
Ay-leen the Peacemaker
In recent years, queer characters are becoming more prevalent in science fiction and fantasy, but we still have a long way to go. This panel will take a brief look at the history of LGBTQ characters in science fiction & fantasy, and what we can do to further promote fair and diverse representation of queer folk in SF/F.

Comments Off on Steampunk Empire Symposium this weekend!