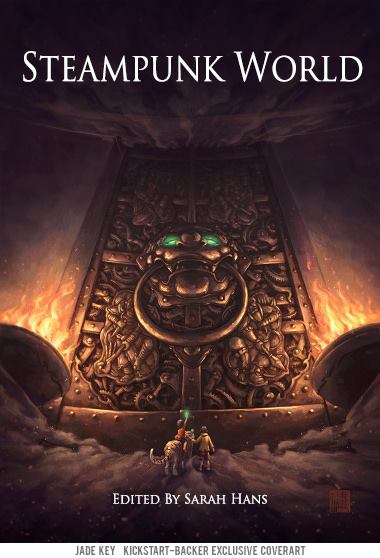 The day has come. STEAMPUNK WORLD is now available for pre-order!  The top image is the regular cover, and our special Kickstarter supporters will receive a limited-edition version with that epic new cover designed by James Ng.

I strongly recommend folks pre-order the books if they are planning to purchase for two reasons. One–it guarantees that you get this awesome book ASAP for your immediate enjoyment. And Two–from a publishing standpoint, books that have strong pre-orders look good in the eyes of distributors and will help keep the book in stock in the long run.

Need more convincing? See the official description after the jump.

Steampunk is fascinating. There’s something compelling about the shine of clicking brass clockwork and hiss of steam-driven automatons. But until recently, there was something missing.

It was easy to find excellent stories of American and British citizens… but we rarely got to see steampunk from the point of view of the rest of the world.

Steampunk World is a showcase for nineteen authors to flip the levers and start the pistons and invite you to experience the entirety of steampunk.

Edited by Sarah Hans, this anthology’s nineteen authors bring us the very best steampunk stories from around the world. The full list of the award-winning authors – including the introduction’s author, Diana M. Pho, founding editor of the oldest-running multicultural blog Beyond Victoriana – can be found below. The cover artwork is by James Ng.

Jay Lake is the award-winning author of ten novels, five collections, and over 300 short stories. He was the winner of the 2004 John W. Campbell Award for Best New Writer. He has been nominated for the Hugo, Nebula, and World Fantasy awards. He has been published by Tor Books, Night Shade Books, MonkeyBrain Books, Fairwood Press, Wheatland Press, and Subterranean Press. He is also a cancer survivor who blogs about politics, technology, and health.

Ken Liu is an author and translator of speculative fiction, as well as a lawyer and programmer. His fiction has appeared in The Magazine of Fantasy & Science Fiction, Asimov’s, Analog, Clarkesworld, Lightspeed, and Strange Horizons, among other places. He has won a Nebula, two Hugos, a World Fantasy Award, and a Science Fiction & Fantasy Translation Award, and been nominated for the Sturgeon and the Locus Awards. He lives with his family near Boston, Massachusetts.

Nisi Shawl’s collection Filter House was a 2009 James Tiptree, Jr., Award winner; her stories have been published at Strange Horizons, in Asimov’s SF Magazine, and in anthologies including The Year’s Best Fantasy and Horror. She was the 2011 Guest of Honor at the feminist SF convention WisCon and 2014 co-Guest of Honor for the Science Fiction Research Association. She co-authored the renowned Writing the Other: A Practical Approach with Cynthia Ward. Shawl’s Belgian Congo steampunk novel Everfair is forthcoming in 2015 from Tor Books.

Lucy A. Snyder is the Bram Stoker Award-winning author of the novels Spellbent, Shotgun Sorceress, Switchblade Goddess, and the collectionsOrchid Carousals, Sparks and Shadows, Chimeric Machines, and Installing Linux on a Dead Badger. She will have two new books out in 2014:Shooting Yourself in the Head For Fun and Profit: A Writer’s Guide will be released by Post Mortem Press, and her story collection Soft Apocalypseswill be released by Raw Dog Screaming Press. Her writing has been translated into French, Russian, and Japanese editions and has appeared in publications such as What Fates Impose, Strange Horizons, Weird Tales, Hellbound Hearts, Dark Faith, Chiaroscuro, GUD, and Best Horror of the Year, Vol. 5.

S. J. Chambers is the Hugo and World Fantasy nominated co-author of the best-selling The Steampunk Bible and The Steampunk Bible 2014 Calendar (Abrams Image). Her fiction has appeared in a variety of venues, including Mungbeing magazine (where her story “Of Parallel and Parcel” was nominated for a Pushcart prize), New Myths, Yankee Pot Roast, as well as in anthologies like the World Fantasy nominated Thackery T. Lambshead’s Cabinet Of Curiosities (HarperCollins), Zombies: Shambling Through The Ages (Prime Books), and the Spanish steampunk anthology Planes B. She has stories forthcoming in Starry Wisdom Library (PS Publishing), Acronos (Tyrannosaurus Books), and in The New Gothic(Stone Skin Press) the latter which features her collaboration with writer extarodinaire Jesse Bullington.

Jaymee Goh is the postcolonial steampunk writer of Silver Goggles, a blog that focuses on postcoloniality, anti-racism and the meaningful participation of people of color in steampunk beyond tokenism. She has been seen on the Apex Book Company Blog, Racialicious.com, andTor.com. Her non-fiction has been published in Steampunk III: Steampunk Revolution, The WisCon Chronicles, and Fashion Talks: Undressing the Power of Style. Her previously published short stories take place in the same steampunk ‘verse as this one. Currently she is a Comparative Literature PhD student at UC Riverside.

Rochita Loenen-Ruiz is an essayist, a fictionist and a poet. A Filipino writer, now living in the Netherlands, she attended Clarion West in 2009 and was a recipient of the Octavia Butler scholarship. In 2013, her short fiction was shortlisted for the BSFA short fiction award. Most recently, her fiction has appeared in We See a Different Frontier, Mothership: Tales from Afrofuturism and Beyond, What Fates Impose, The End of the Road anthology, and as part of Redmond Radio’s Afrofuturism Event for the Amsterdam Museumnacht at FOAM museum. She also has upcoming work inClarkesworld Magazine.

Lillian Cohen-Moore is an award winning editor (Indie RPG Awards, Origins Award, for Do: Pilgrims of the Flying Temple), and devotes her writing to fiction, journalism and game design. Influenced by the work of Jewish authors and horror movies, she draws on bubbe meises (grandmother’s tales) and horror classics for inspiration. She loves exploring and photographing abandoned places. She is a member of the Society of Professional Journalists and the Online News Association.

New Zealand born fantasy writer and podcaster Philippa (Pip) Ballantine is the author of the Books of the Order and the Shifted World series. She is also the co-author with her husband Tee Morris of the Locus best selling, Ministry of Peculiar Occurrences novels, which have all appeared in the top 10 science fiction titles of the Goodreads Awards for the year they were published. Her other awards include an Airship, two Parsecs, the Steampunk Chronicle Reader’s Choice, and a Sir Julius Vogel. She currently resides in Manassas, Virginia with her husband, daughter, and a furry clowder of cats.

Balogun Ojetade is author the Steamfunk novel Moses: The Chronicles of Harriet Tubman, the Sword and Soul novel Once Upon A Time in Afrikaand the Urban Fantasy novel Redeemer. He is contributing co-editor of the anthologies, Steamfunk and Ki-Khanga: The Anthology. Finally, he is screenwriter and director of the action film, A Single Link and the Steamfunk film Rite of Passage.

Alex Bledsoe grew up in west Tennessee an hour north of Graceland (home of Elvis) and twenty minutes from Nutbush (birthplace of Tina Turner). He’s been a reporter, editor, photographer and door-to-door vacuum cleaner salesman. He now lives in a Wisconsin town famous for trolls, writes before six in the morning and tries to teach his three kids to act like they’ve been to town before. He is the author of the Eddie LaCrosse series (most recently He Drank, and Saw the Spider), the Tufa novels (Wisp of a Thing and The Hum and the Shiver) and the Firefly Witch ebooks.

Indrapramit Das is a writer and artist from Kolkata, India. His fiction has appeared in publications including Clarkesworld Magazine, Asimov’s Science Fiction and Apex Magazine, as well as anthologies such as The Year’s Best Science Fiction: Thirtieth Annual Collection (St. Martin’s Press),Aliens: Recent Encounters (Prime Books) and Mothership: Tales from Afrofuturism and Beyond(Rosarium Publishing). He has written reviews of film, books, comics and TV for Strange Horizons and Slant Magazine. He is a grateful graduate of the 2012 Clarion West Writers Workshop and a recipient of the Octavia E. Butler Scholarship Award to attend the former. He completed his MFA at the University of British Columbia and is currently in Vancouver working as a freelance writer, artist, editor, critic, TV extra, game tester, tutor, would-be novelist, and aspirant to adulthood.

Emily Cataneo is a dark fantasy and horror writer based in Boston, Mass. Her short fiction is forthcoming from the Chiral Mad 2 anthology and from the online magazine Kaleidotrope. She is a 2013 graduate of the Odyssey Writing Workshop and a member of the online Codex Writers Group. Her stories usually involve winter, bones, female friendships, the Victorian occult, anxious characters, and the darkly beautiful. When she’s not writing fiction, she’s a freelance journalist for the paper of record in the Greater Boston area.

Malon Edwards was born and raised on the South Side of Chicago, but now lives in the Greater Toronto Area, where he was lured by his beautiful Canadian wife. Many of his short stories are set in an alternate Chicago and feature people of color. Currently, he serves as Managing Director and Grants Administrator for the Speculative Literature Foundation, which provides a number of grants for writers of speculative literature.

Tade Thompson’s roots are in Western Nigeria and South London. His short stories have been published in small press, webzines and anthologies. Most recently, his story “Notes from Gethsemane” appeared in The Afro SF Anthology, and “Shadow” appeared in The Apex Book of World SF 2, and “120 Days of Sunlight” appeared in Mothership: Tales from Afrofuturism and Beyond. He lives and works in South England. He creates under a unified influence field comprised of books, music, theatre, comics, art, movies, gourmet coffee, and amala. He has been known to haunt coffee shops, jazz bars, bookshops, and libraries. He is an occasional visual artist and tortures his family with his attempts to play the guitar. You can find him on Twitter as @tadethompson

Nayad A. Monroe is an editor and short-story writer. She read over 5,000 submissions for the Hugo Award-winning semiprozine,Clarkesworld Magazine, before she became an editor with her anthology of divination stories, What Fates Impose. Several of her short stories have been published in various anthologies, such as Space Grunts: Full-Throttle Space Tales #3; Space Tramps: Full-Throttle Space Tales #5; The Crimson Pact: Volume Two; and Sidekicks!. Her sidekick story, “Quintuple-A,” is scheduled to be made into a short film by Wild Hawk Entertainment. Nayad has also contributed an interview with Tim Powers to Writers Workshop of Science Fiction and Fantasy. You can find her making odd remarks on Twitter as @Nayad.

Lucien Moussa Shukri Soulban is an author from Montreal, Canada. He was born in Saudi Arabia, but grew up in Houston, Texas. He has lived in Montreal for 16 years. Lucien Soulban is his real name.As well as numerous credits, both role-playing and fiction, with White Wolf, he has written for Dream Pod 9, AEG, WizKids and Guardians of Order, and has also worked on video games with Relic and Artificial Mind and Movement, among others.

Benjanun Sriduangkaew‘s short fiction has appeared in Clarkesworld, Beneath Ceaseless Skies, GigaNotoSaurus and anthologies from Solaris Books and Mythic Delirium.

Diana M. Pho (Ay-leen the Peacemaker) is a scholar, activist, blogger, and general rabble-rouser. She earned her B.A. from Mount Holyoke College and her M.A. from New York University. Awards given for her work include the Steampunk Chronicle Reader’s Choice Awards for “Best Politically-Minded Steampunk” and “Best Multicultural Steampunk” in 2012 and 2013 as well as “Best Blog” and “Best Feminist Steampunk” in 2012; the SteamCon Airship Award for “Community Contributor” in 2013; the Last Drink Bird Head Award for “Gentle Advocacy” in 2010. About her work, New York Times bestselling author of the Leviathan trilogy, Scott Westerfeld has said, “I always point to her to rebut the genre’s haters.” Diana currently lives and works in New York City for Tor Books & blogs for Tor.com. You can follow her academic work on Academia.edu.

So what are you waiting for? Pre-order yours today!

Comments Off on Pre-order STEAMPUNK WORLD from Alliteration Ink

Filed under Announcement, Beyond Victoriana Odds and Ends