#SteampunkHands – On Crafting a Subcultural Lifestyle: Objects and the Search for Home in Steampunk (Part 5) 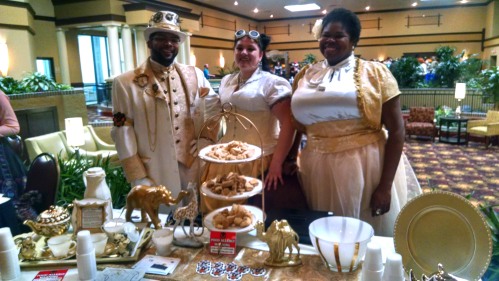 The Airship Ashanti in the 2015 International Steampunk Symposium. They were that year’s winners of the Airship Games.

A Genre for our Times: Living Steampunk in Pursuit of “the Good Life”, A Conclusion

During my extensive involvement in the steampunk community, I have contemplated the meaning of what constitutes a lifestyle and whether that coincides with the personal beliefs one holds. While I began this paper with the intention of exploring the separation of ideology with lifestyle, I also believe that people who are heavily involved in the steampunk community hold a specific worldview. In my interviews with members of the community, I came upon a dozen different responses to the question, “Do you think steampunks have a specific ‘mindset’?” Many vehemently rejected the idea that there was one common mindset (thus, hinting at the collective notion of respect for individual opinions and a general distaste toward imposing one’s opinion upon others.) Many other responses, however, incorporated the idea that steampunks are artists who prefer looking at the world more creatively than the average person. Artist Tamara Lavery mentions that, “I believe it is a very fertile mindset. Many of those involved are makers. Artists, crafts people, musicians,….while going to an event and purchasing something amazing made by another is mad fun, most of us are also happiest making or at least “modding” for ourselves.”1 Another steampunk, author Leanne Renee Hieber mentions the commodification of subculture in her response, but with an anti-commercial, pro-community spin: “I think there are common themes. Craft and maker culture as valued commodity (I consider myself a “maker” too, I make books). History is alive and re-imagined in us. Play, fancy, fantasy, adventure and whimsy are also a valued commodity.”2

In fact, what I found in common in many of these responses is how many steampunks link a “steampunk worldview” (if it does exist) to a set of materialist ethics with the world that emphasizes the imagination as a method to break away from normalized constraints of society. The nineteenth century, more than a common focal point of interest, is considered the nexus point of the standards of our modern world. Steampunks view the Victorian era as the beginning of the end with the tide of industrial, social, political and economic changes that directly changed our lives for the worst. By returning to the Victorian, the steampunk aesthetic movement both celebrates a historical era of change while also integrating anachronistic elements into history in the romantic hope of undoing the past to re-create a better present. The idea is speculative in design, but realist in execution. The steampunk aesthetic movement is one method in which people project their utopian ideals onto the everyday.

Though the community is small, and the word still unknown to much of the dominant culture, for this set group of people, the steampunk movement gives them a means of control in a precarious world; Jackson notes the importance of everyday interactions that marginalized communities use to rectify against the harshness of greater society: “All too often, people nowadays feel the world is beyond their control. It appears alien and indifferent….In the sanctuary of the small we seem to recapture something of the meaning and power we once felt in relationship to the world.”3 Steampunks, more than anything, cherish the small. The one-on-one interactions between people. The stylish swagger that comes with wearing a well-pressed suit or a beautiful dress. The time spent on repairing broken, vintage things. The moments of connection that comes with discussion big ideas, with speculative storytelling, with squeeing over a shared love for a certain book or film or music. That single place where you can go and feel an “old-fashioned” sense of home.

Steampunk as a genre rebels against modern times in order to recreate a new form of temporal existence, inspired by fiction. Susan Stewart acknowledges how fictive time creates a level of freedom since it is considered divorced from history: “Rather than being in time, in history, these latter and increasingly fictive genres are viewed as being outside time and unmodified by the contingencies and responsibilities of historical time.”4 At the same time, however, history in steampunk is emblematic of both realist failure and potentiality of hope; and this pursuit of an impossible utopic past is one example of a new sort of genre-bending aesthetics emerging in a pessimistic, postmodern world. Our cultural moment is ripe for these new aesthetics, according to cultural theorist Lauren Berlant: “The urgency is to reinvent, from the scene of survival, new idioms of the political, and of belonging itself, which requires debating what the baselines of survival should be in the near future, which is, now, the future we are making.”5 While I had avoided establishing a specific political standpoint in my investigation, the actions of the everyday are nonetheless very ideological. Steampunks are producing Berlant’s idea of “the good life” for themselves, which is why they warrant attention as harbingers of today’s cultural moment. In being inspired by this genre – one that draws upon the speculative and the practical, one that is both absorbingly imaginary and profoundly concrete – steampunk takes the sense of wonder, discovery, fear, and innovation from the novel and manifests these ideals into real life in various transformative ways: as objects, as spaces, and most importantly, as a mindset.

Thus, when looking at the steampunk object, we must think to ourselves, “Ceci n’est pas une pipe.” More than a sense of play or style, the steampunk aesthetic – while not necessarily politically ideological, captures a reactionary response people have to our current historical moment; it is craftwork, a genre, and, most importantly to consider, a form of common art. Corse cites Theodor Adorno’s argument that artworks contained an “otherworldly” sense to them; this sense of not a romantic ideal, but “the fact that artworks go beyond conceptuality gives them a felt quality that is difficult for our concept-based language to describe.”6 Art objects, then, are affective, physical manifestations of Raymond Williams’ structures of feeling. The sociopolitical power of steampunk, then, lies in the transference of social forces between individuals, much like how machines turn steam into pure energy: an invisible potentiality that empowers and motivates change into the world. If nostalgia is as Stewart describes it, “sadness without an object,” could the idealization of the vintage object, then, bring about a new form of materialist-oriented, realistic change? Maybe so.

In this manner, the methods fostered by the steampunk community have larger sociopolitical ramifications, but not necessarily because it’ll grow overnight like Occupy Movement or instigate another Tahrir Square. Like the early locomotive, steampunk builds grass-root networks of like-minded individuals who are critical thinkers with a bit more pluck than most, willing to learn from others with an open mind, and have an invested interest in education, history, and culture. Steampunk communities promote micro-changes that contribute toward a renewed sense of personal ethics and community responsibility. Though steampunks may be only cogs in part of a larger social machine, if they turn enough gears in one direction, they might just steer the course of their small world toward a better future.

As part of my research for this paper, I interviewed a range of participants in the steampunk community of the New York and New England area during the months of February and March of 2012. These interviews were conducted one-on-one in person, over the phone, and via email. In total, I interviewed 23 people, in addition to one group interview during the Steampunk Salon meet-up in February 2012. Out of the individuals I interviewed, 11 were women and 12 were men, and the median age was 33 years old, with the youngest participant being 24 and the oldest 50.

Stewart, Susan. On Longing. Narratives of the Miniature, the Gigantic, the Souvenir, the Collection. Durham, NC: Duke University Press. 1993.

Tagged as "personal essay", academia, On Crafting a Subcultural Lifestyle, Steampunk Hands Around the World

7 responses to “#SteampunkHands – On Crafting a Subcultural Lifestyle: Objects and the Search for Home in Steampunk (Part 5)”