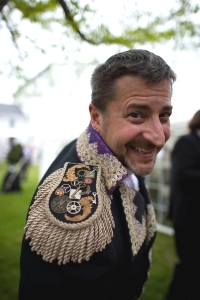 To close out 2016, I’m boosting my steampunk comrade-in-arms Kevin Steil’s 100th interview on the Airship Ambassador (and here’s great snapshot of him from my wedding this year, where he served as the officiant!). He has been tirelessly tacking the steampunk community for the last six years, and has touched base with people he interviewed in the past (including yours truly) to see how their time in the community has been. Here’s the full ten part series, featuring Tee Morris and Pip Ballantine, Evan Butterfield, Gail Carriger, Jaymee Goh, James Ng, Mike Perschon, Richard Preston, Lev AC Rosen, Arthur Slade, Nick Valentino, and Jean-Christophe Valtat.

Filed under Beyond Victoriana Odds and Ends, Interviews