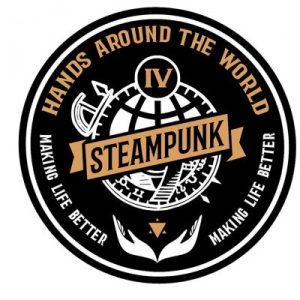 Time for Steampunk Hands Around the World, the annual blogging carnival and celebration of the global community! This year’s theme is a very relevant one, and in participation, I’ll be running a series of book giveaways throughout the month (since, of course, reading widely across different cultures and fresh perspectives from marginalized backgrounds is one way we can imagine ways of making life better.)

This week, I’ll be giving away a two books: A.J. Hartley’s Steeplejack in hardcover and a special advanced reader’s copy of its sequel, Firebrand which will publish in June 2017!

Check out details about the giveaway  after the jump. You can also check out the Official Link guide to Steampunk Hands to follow what others are doing.

Edit: Congrats to Aaronious01 for being selected our first giveaway winner! Follow along the blog the rest of this month for opportunities for more books. 🙂 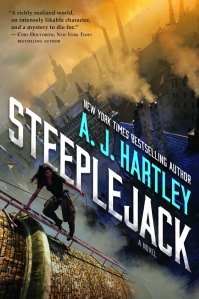 Seventeen-year-old Anglet Sutonga lives repairing the chimneys, towers, and spires of the city of Bar-Selehm. Dramatically different communities live and work alongside each other. The white Feldish command the nation’s higher echelons of society. The native Mahweni are divided between city life and the savannah. And then there’s Ang, part of the Lani community who immigrated over generations ago as servants and now mostly live in poverty on Bar-Selehm’s edges.

When Ang is supposed to meet her new apprentice Berrit, she finds him dead. That same night, the Beacon, an invaluable historical icon, is stolen. The Beacon’s theft commands the headlines, yet no one seems to care about Berrit’s murder—except for Josiah Willinghouse, an enigmatic young politician. When he offers her a job investigating his death, she plunges headlong into new and unexpected dangers.

Meanwhile, crowds gather in protests over the city’s mounting troubles. Rumors surrounding the Beacon’s theft grow. More suspicious deaths occur. With no one to help Ang except Josiah’s haughty younger sister, a savvy newspaper girl, and a kindhearted herder, Ang must rely on her intellect and strength to resolve the mysterious link between Berrit and the missing Beacon before the city descends into chaos.

“A richly realized world, an intensely likable character, and a mystery to die for.” — Cory Doctorow, New York Times-bestselling author 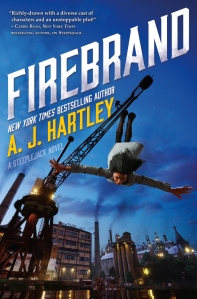 Once a steeplejack, Anglet Sutonga is used to scaling the heights of Bar-Selehm. Nowadays she assists politician Josiah Willinghouse behind the scenes of Parliament. The latest threat to the city-state: Government plans for a secret weapon are stolen and feared to be sold to the rival nation of Grappoli. The investigation leads right to the doorsteps of Elitus, one of the most exclusive social clubs in the city. In order to catch the thief, Ang must pretend to be a foreign princess and infiltrate Elitus. But Ang is far from royal material, so Willinghouse enlists help from the exacting Madam Nahreem.

Yet Ang has other things on her mind. Refugees are trickling into the city, fleeing Grappoli-fueled conflicts in the north. A demagogue in Parliament is proposing extreme measures to get rid of them, and she soon discovers that one theft could spark a conflagration of conspiracy that threatens the most vulnerable of Bar-Selehm. Unless she can stop it.

How to enter:
1) Readers comment below with your favorite steampunk book to enter. Readers can only submit one entry per household. US and International entries are welcome.
2) Enter between February 5th, 2017, through February 10th, 2017, at midnight EST (GMT -5:00).
3) Winner will be chosen via their comment number using Random.org. Winner will be contacted via email and must reply within 24 hours with their mailing address to claim their prize. Otherwise a new winner will be selected.