Here’s what people are saying about Ay-leen the Peacemaker & Beyond Victoriana. 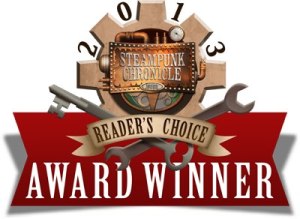 Winner for a second year in a row! 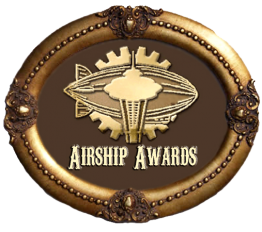 Winner of the 2010 Last Drink Bird Head Award for “Gentle Advocacy”
In recognition of individuals willing to enter into blunt discourse about controversial issues.
The purpose of the awards is to celebrate those in the genre community who enrich us with their time, energy, and words, for causes greater than themselves.

Nominee for the 2011 Airship Awards for “Community Contributor”
An individual who is outspoken and supportive in the steampunk community, including but not limited to: Blogger, event organizer, convention runner, scholar, speaker etc.

***
I always point to her to rebut the genre’s haters. – Scott Westerfeld (source)

***
Ay-leen gives me hope for the future of steampunk. – Jake Von Slatt, proprietor of The Steampunk Workshop. (source)

***
The most important article in Steaming is the only one that seems to acknowledge just how loosely the community defines itself while, at the same time, just how adamant the members are in drawing boundaries and finding the ever-elusive “authentic” steampunk style. Diana M. Pho, in “Objectified and Politicized: The Dynamics of Ideology and Consumerism in Steampunk Subculture” takes the internal contradictions of the steampunk community as her subject.  – OneLastSketch blog on Steaming into the Victorian Future (source)

***
But the stuff Ay-Leen writes about is really interesting because she’s actually working towards a reclamation of sorts. Steampunk in this sense seems to be a chance to reject the narrative of impoverished savages and subjected women and reshape it to be more cohesive and empowering. – Erin Polgreen on COLORLINES (source)

***
We’ll be completely honest with you: we don’t really read blogs….However, once in a while we find something that’s so special that we couldn’t ignore it even if we wanted to, and this is most definitely the case with Ay-leen the Peacemaker’s new project: Beyond Victoriana. – Steampunk Magazine (source)

***
This site is an excellent look at different cultural perspectives for steampunk, especially in terms of country and color. Highly recommended. –Dieselpunk.net (source)

This series is so incredibly amazing and I am so, so happy that Ay-Leen is writing and sponsoring them. It’s a fantastic resource, and shows the vast, beautiful, fantastic possibilities that the steampunk genre can encompass — but only if we stretch the fandom to allow room for more than just the basic Brit-centric faux-Victoriana, and be welcoming while we do it…. It’ll crack your imagination wide open. – Jane Irwin, author of the webcomic Clockwork Game (source)

I enthusiastically support these writers for addressing these questions; I love steampunk, but it has some uncomfortable historical associations, especially for someone of white European descent, such as myself (my immediate ancestry is Italian, French, and German). Addressing such associations and expanding the discourse surrounding steampunk’s political and ideological underpinnings only serves to enrich the movement. I hope others take up the challenge, as well. – Dr. Dru Pagliasotti, professor and author of Clockwork Heart (source)

I am thrilled to discover this, since this is a topic which fascinates me and I think deserves all sorts of attention. – Steampunk Librarian (source)

If historical fiction, fabulous costuming, art, culture and the past and present crossroads of the world interests you, be sure to follow Beyond Victoriana and Silver Goggles. Amazing resources, fabulous women, who, like Steampunk, are happening now. – Leanna Renee Hieber, author of The Strangely Beautiful Tale of Miss Percy Parker (source)

***
OMFG! Beyond Victoriana panel was the best thing at SPWF! – Jake von Slatt, proprietor of The Steampunk Workshop (source)

Ay-leen’s blog is a great example of what the conversation looks like. In her “First Nation Sci-Fi & Technology Resources” article, she demonstrates (without calling it this), a RaceWin list. Rather than targeting books that “fail,” Ay-leen holds up the ones that win, and focuses on them. She encourages us to read them, and learn. She invites us into the conversation, and gives enough space for it to occur. –  Mike Perschon, The Steampunk Scholar (source)

Relating to Beyond Victoriana and the intersection of race, culture, fandom, and steampunk.

“The Roundtable of DOO- I mean, of Race and Steampunk.” Conducted with Jaymee Goh for Tor.com. October 27, 2009.

“Steampunk Fashion: A Closer Look Inside” on Brooklyn Exposed December 8, 2010.

An Interview with Ay-leen the Peacemaker The Underlined Word.  May 26, 2011.

The Steampunk Bible Abrams Image, May 2011.

Why Diversity at Comic Con is So Important MSN.com October 11, 2015.

Written works by Ay-leen the Peacemaker that are not exclusive to this site, about steampunk as a subgenre and as a subculture community.

Articles
“From the Wilds of America” – Analyzing the Idea of “British Colonial America” in Steampunk Racialicious. 1 July 2009.

“Shimmies and Sprockets: Analyzing the Use of Belly Dance in Steampunk“ Steampunk Magazine Issue #07. April 2010. (Read an excerpt here)

Today’s Best Steamreads for the Novice Steampunk May 2010. All Things Steampunk

“Steampunks Around the World, Unite: Multiculturalism in Steampunk.” August 2010. Guest series hosted at Free the Princess (link to index), Doc Fantastique’s Show of Wonders, and Steampunk Magazine.
Available in Italian courtesy of reginazabo and Ruggine magazine  (PDF download or online Part #1 and Part #2)

“The Ao Dai and I: A Personal Essay on Cultural Identity and Steampunk.” October 20, 2010. Tor.com

So Much Steampunk, They Had to Say it Twice: Steampunk II: Steampunk Reloaded Review October 29, 2010. Tor.com

Yes, I Did Stick a Gear on It: The Illusion of Steampunk Performance April 27, 2013. Steampunk Canada.