Yes, I Did Stick a Gear on It: The Illusion of Steampunk Performance — Guest Post on Steampunk Canada

Note: Thanks to Countessa Lenora for the opportunity to write this guest post for her blog!

My Peacemaker was originally a chalking gun. I admit it. It’s pretty obvious to anyone who looks at it for more than ten seconds. Sometimes, people think it was a cookie gun, and I don’t mind that either. I like cookies.

There has been an unusual attitude, I’ve noticed, about the creation of steampunk props and the role of functional art. I’ve seen dismissive railing against “stick a gear on it” for physical artistic creations, the trumpeting of modded computers and iPods over spray-painted Nerf guns. I have no issue with beautiful functional art or people to have creative ambitions (and yes, that song based on the concept is pretty cute). But, as a performer with cosplayer roots, I never fully understood the ridicule. Because, a prop is a prop is a prop and as long as it helps you perform, whether the steampunk prop shoots real lightning or falls apart after being out in a rainstorm, as long as it enhances your artistic performance, it is a good steampunk prop.

[Read the rest on Steampunk Canada]

Comments Off on Yes, I Did Stick a Gear on It: The Illusion of Steampunk Performance — Guest Post on Steampunk Canada 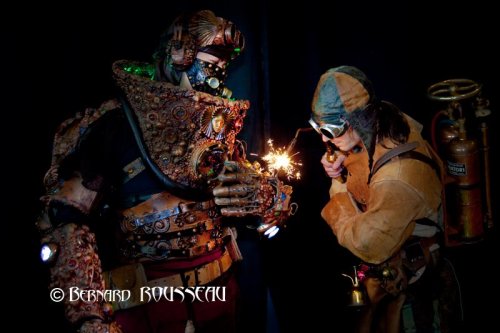 Striking. Powerful. Imposing. These are some of the words that come to mind when viewing a costume piece by Maurice Grunbaum. Maurice, an artist based in Paris, is well-known in the French alt and cosplay community for his amazing detailed costume and prop work, and images of his outfits have circulated throughout the steampunk aethernetz. I first noticed him in group shots with other steampunks of color (he’s the masked gentleman on the right).

On his Facebook, you can find detailed cosplays from Bioshock, League of Extraordinary Gentlemen, and other steampunk-inspired sources. On the rise nationally in France, his art was included in the exhibition “Future Perfect: Retrofuturism/ Steampunk/ Archeomodernism” («Futur Antérieur: Rétrofuturisme/ Steampunk/ Archéomodernisme») at the Agnes B. Galerie in Paris (watch the museum trailer below for a clip of Maurice talking about steampunk).

When I read his interview included in the exhibit’s catalog, I was blown away by his articulate passion for everything steampunk and his need to broaden the definition of steampunk to include influences outside the Victorian and the French «La Belle Époque». So with a little help from a French friend-of-the-blog, I was able to get an interview with Maurice.

END_OF_DOCUMENT_TOKEN_TO_BE_REPLACED

Steampunk Panda as the Imperial Sheriff

I have been aware of Steampunk for some time but it was not until the tail end of the summer of 2011 that I decided to take a closer look and learn more about Steampunk.  As I delved into the culture I noticed how it was very Victorian, based in the 19th century British culture.  That was understandable seeing how it was based off of many early literatures that were set in those areas.  However, the world does not revolve around one geographical location or ethnic background for that matter, and while life progresses in one location it invariably continues on elsewhere.

So for Steampunk to be only Victorian or only British I found that rather stifling and ethnocentric, which from what I had started to learn of the subculture was not what it wanted to do, but rather be an inviting and accepting one.  Perhaps it was the fact that people were uncertain of how to approach other ethnicities with the Steampunk culture without being offensive.  Especially in a time period where racism was not only prevalent but well practiced.

Being new to Steampunk and wanting to take my own twist to it I looked at my own heritage of Chinese culture and doing some cursory research as to what was going on in China during the 19th century.  It was the time of the Opium Wars, the Boxer Rebellion, and in America the railroads were being laid down by my ancestors.  It was a time period I was somewhat familiar with albeit slightly romanticized and dramatized from all the Hong Kong and Chinese cinemas I watched growing up as a child.  Still the clothes and some of the basics of the culture at the time were there. 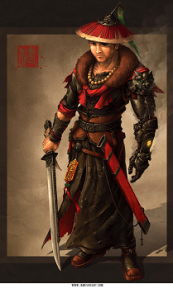 As I researched further into Steampunk to find connections to Asian culture I looked to see if others had gone down this path before me. It would seem that for the most part when looking for Asian and Steampunk on the internet more often than not it was found that Asians were in a European/British style outfit or even perhaps a person wearing a kimono with a corset over it.  This does not detract from the fact that even during that time period there were indeed many Asians who wore European/British stylings back then as Western culture was placing its influence over the native Asian culture. What it did was inspire me to find a way to express what it would have been like in Asia without the western influence.

It would be during my research that I would happen upon an artist who would be my catalyst and inspiration towards my goal of expressing a truly Asian themed Steampunk outfit.  James Ng and his Imperial Steamworks series is truly awe inspiring and a solid foundation for which Asian Steampunk can develop from.  It was the discovery of his work that allowed me to feel not alone in the ideas and concept of Asian Steampunk and legitimized for me this evolutionary path for it, and that I hope to see this path flourish by spreading it any way I could.

With his permission I took it upon myself to bring one of his creations to life, his Imperial Sheriff.

END_OF_DOCUMENT_TOKEN_TO_BE_REPLACED

Work has been hectic as of late, and I’m also in the midst of preparing for Dragon*Con. I don’t have as much new stuff planned out for this week as I had hoped, but have you checked out my essay series about multiculturalism in steampunk yet? And see the links below for more good things to read/watch/run in the streets shouting about.

END_OF_DOCUMENT_TOKEN_TO_BE_REPLACED

Tonight, I finally sat down and started to read through the whole whole big RaceFail’09 drama over in the sci-fi writing world. I had read the first bits on Elizabeth Bear’s blog back in January, but now saw how much it had morphed into this huge, sleep-depriving, time-suck that triggered all of my political kinks.

When I first read it in January, though, it brought up a lot of concerns I had been having about steampunk. Particularly about “Where am I?” in steampunk culture. After all, steampunk is all about the sci-fi, and if people of color are having issues with sci-fi in general, then would the turf here be any better?