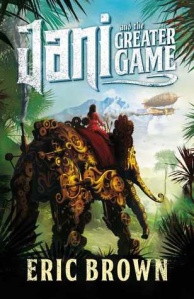 Janisha Chatterjee is a woman tangled up in layered identities. She lives during the heyday of British imperial rule, which is powered by mysterious technology known as Annapurnite. The privileged daughter of an Indian government official, Jani is an accomplished citizen of Empire—modern, secular, and studying medicine at Cambridge. She feels increasingly at odds, however, with the world around her: not fully fitting in as a mixed-race woman on the streets of London or in the market squares of Delhi. She also has growing reservations about the Raj, despite her father’s accomplishments as Minister of Security.

When her father falls gravely ill, she takes the first dirigible back east. The Rudyard Kipling’s journey, unfortunately, is cut short by a Russian attack that kills nearly everyone on board. One of the few survivors amongst the wreckage, Jani discovers that the airship had been transporting a most unusual prisoner. This stranger bestows a dangerous gift to Jani that reveals the British Empire’s source of military might…. and a dire warning about a threat which endangers the entire world.

Read the review on Tor.com