A Land without Leaders: A Country of Ghosts by Margaret Killjoy on Tor.com

The most fantastical aspect of A Country of Ghosts is how it’s an earnest tale about an alternative society when dystopias fill today’s bookshelves. Full disclosure here:the author has written for Tor.com, and I did hold interest in reading his book once he described it to me as an “anarchist utopia.”

With that seed in mind, I couldn’t help but view A Country of Ghosts as the latest in a long tradition of utopian novels, starting with Thomas More’s as the most well-known early example (and a fantastic open source annotated edition can be read here).

Of course, utopias and speculative fiction go hand in hand. In the 19thcentury, Charlotte Perkins Gilman’s Herland envisioned a society of women. Alexander Bogdanov wrote about communist utopia on Mars in his 1908 book Red Star. Later utopian novels include Ursula K. Le Guin’s take on anarchism in The Dispossessed, Arthur C. Clark’s peaceful alien invasion inChildhood’s End, Aldous Huxley’s utopian counterpart to Brave New World in Island, and the fulfillment of the radical movements of the 1960s in Marge Piercy’s Woman on the Edge of Time, along with many others.

In A Country of Ghosts a regional collective known as Hron (they’re only kinda, sorta a country) fights against a colonial empire, and Killjoy’s mix of politics and storytelling is at times intellectually engaging and at times winsome, though it’s also a curiosity to behold in the field today.

Read the rest of the review here: [“The rules don’t really matter. It’s the spirit that matters, I think.”]

Comments Off on A Land without Leaders: A Country of Ghosts by Margaret Killjoy on Tor.com

Pictured above, members of an African-American acting troupe who journeyed to the Soviet Union to star in a film in the 1930s. The group was led by the young Louise Thompson Patterson and included amongst them the poet Langston Hughes

“Socialism is the preparation for that higher Anarchism; painfully, laboriously we mean to destroy false ideas of property and self, eliminate unjust laws and poisonous and hateful suggestions and prejudices.”–H.G. Wells

“Steampunk will never be afraid of politics,” declared writer and Steampunk Magazine editor Margaret Killjoy in a well-read 2011 article. In it, Killjoy pushed back against any notion that steampunk was merely about brass buttons and brassieres–though it’s that too. Tracing the long history of political thought, and political radicalism, in the genre, she pointed to the early works of Jules Vernes and H.G. Wells, and the more modern anarchist tendencies of Michael Moorcock and Alan Moore. Killjoy went on to declare steampunk as even inherently anticolonial; in its re-imaginings of our historical past steampunk was “antithetical” to colonialism, the latter being “a process that seeks to force homogeneity upon the world” while the former “is one of many, many movements and cultures that seeks to break that homogeneity.”

Indeed, steampunk (beyond even its literary creations) has sparked numerous discussions and debates on race, slavery, colonialism, gender, class and sexuality. More than any other genre of speculative fiction, it forces us to confront our more immediate past, and has an active cadre that launches criticism upon anything that appears to fantasize, apologizes or fails to acknowledge the disparities and inequities of these by-gone eras. It makes steampunk a fractured genre, where the donning of a simple article of clothing or a decision to write about some obscure bit of the past, can spark debates or whole blogs on racism, cultural appropriation, gender inequality and [insert-your-privilege-here]-splaining. And that’s a GOOD thing.

END_OF_DOCUMENT_TOKEN_TO_BE_REPLACED

Politics in Steampunk – A Sampling (aka “Why it Matters”) 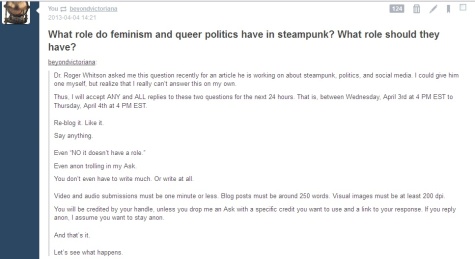 Interrupting this blog for a special bulletin — or, rather, a bit of an intellectual endeavor. I’ve been talking with Dr. Roger Whitson of Washington State University about steampunk — and he is currently working on an MLA Special Session proposal on the subject — and what came up in our discussion was the role of the social media and how it fosters and records the process of cultural change. Steampunk, which has been both upheld as a ideological movement and downplayed as an apolitical fashion trend, is only as politically substantial as people make it to be. But the use of the aethernetz, however, democratizes the power of social opinions and magnifies the power of these conversations.  More importantly, however, all of these conversations create a more transparent picture of what cultural politics are actually happening on the ground, and opens up more possibilities of challenging “entrenched institutions”, as Roger explained to me, “…it is a politics that is removed from the exclusive analysis of the academic, the editor, and the expert, and placed into the hands of everyday people using social media.”

How can we gauge the political potential of our imaginations in the steampunk community?

Thus, Roger asked me to submit a brief response — at most 250 words — in reply to his questions: “What role do feminism and queer politics have in steampunk? What role should they have?” in order to assist his article on steampunk fandom and the digital archive.

And of course, being a steampunk, I rebelled, and, instead, unleashed this question to my fellow readers. To show a sampling of what political awareness the community has (and the application of that awareness to steampunk) I posted the above blog to Beyond Victoriana’s tumblr and another one to its Facebook page.  After the jump, I do give my response, but it cannot be one made separate from the responses of many, many others.

END_OF_DOCUMENT_TOKEN_TO_BE_REPLACED

Filed under Beyond Victoriana Odds and Ends, Essays

END_OF_DOCUMENT_TOKEN_TO_BE_REPLACED 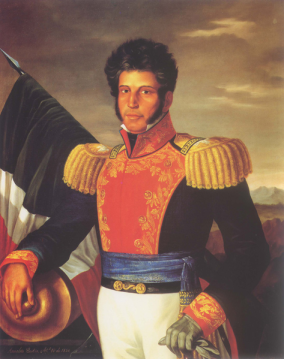 For this President’s Day in the United States, we’re honoring the first black president in the Americas. No, not Obama – this guy was Vicente Ramón Guerrero Saldaña, the first black and indigenous president of Mexico.  Known as the George Washington and the Abraham Lincoln of Mexico, Guerrero was a leading general in the Mexican War for Independence, and abolished slavery in 1829, forty years before Lincoln would do the same.  Not only that, but he came from the “las clases populares” aka the working classes of Mexico, and rose from there to become one of the most influential leaders in Mexican history.

END_OF_DOCUMENT_TOKEN_TO_BE_REPLACED

Today I got my contributor’s copy of Overland, Australia’s oldest progressive literary magazine. The editor had asked me to write about the state of politics in the steampunk movement, and I threw in my two bits and thensome. You can read it in their current print issue or on their website online. Here’s a snippet to get those gears turning:

Steampunks tend not to idealise the past, despite being fascinated by this conflicted history. Just as cyberpunk – the sci-fi term that inspired Jeter’s ‘steampunk’ – involved conflict with shady multinational corporations and the authoritative state in a techno-infused future, today’s steampunk community flips the bird at Victorian norms, dismantling history and exposing it as the construct that it is.

Overland’s blog editor Rachel Liebhaber also wanted to ask me some questions about steampunk subculture, why I think it’s gaining popularity, and other tidbits in addition to the article. So I answered them as a website exclusive in “Writing Steampunk.”

Check them both out, and let me know what you think!

Filed under Announcement, Beyond Victoriana Odds and Ends, Essays, Interviews

Friend of the blog, Miriam Rocek, aka Steampunk Emma Goldman recently was interviewed by a local New York Times correspondent for a documentary about America’s most famous anarchist and her old haunts in the East Village. I’m thrilled to see how steampunk is gaining some well-deserved recognition for its political potential. Watch the video below and read the accompanying article.

Cartoon from The Wasp. Image courtesy of Berkeley University. Click for link.

Historical and cultural trends fed into the development during the 19th century of the Yellow Peril in the United States and Europe. The first Asian immigrants to the United States were the Chinese who took part in the Gold Rush in California in the late 1840s. They were the first free nonwhites to arrive in the United States in large numbers, and the racial, religious, cultural, and linguistic differences between white Americans and the Chinese immigrants, as well as the perception that the Chinese were taking jobs away from white Americans, led to hostility and racism directed at the newcomers. Among the manifestations of this hostility was a new set of anti-Chinese stereotypes. (The lack of Japanese immigrants in America as well as the perception in America that Japan was an ally of the West kept stereotypes about the Japanese to a minimum until the aftermath of the Russo-Japanese War in 1905).

END_OF_DOCUMENT_TOKEN_TO_BE_REPLACED

“If I walk, I hope my footsteps won’t be erased just like that… I want many other footsteps to follow mine!” – Anne Avantie

Anne Avantie’s signature kebaya designs are growing in popularity as Asian fashion enters the global scene. Born to Chinese parents in Solo, Indonesia, Anne never had any formal training in fashion design, but always had an interest in the fashion world. Her love for fashion design started young, when she created and sold hair ornaments to her friends in elementary school. As she grew older, Avantie began doing costume design for her school events and other local events in Solo, and in 1989, she started her own company with only a rented house and two sewing machines. Her business soon boomed, however, with her specialization in her elaborately beaded costume wear and wedding gowns.

END_OF_DOCUMENT_TOKEN_TO_BE_REPLACED

During the aftermath of the Industrial Revolution, causes for gender equality were being raised by men and women throughout the world. In 1909, under the helm of the Socialist Party of America, the first National Women’s Day was celebrated in the United States on February 28th. In 1910, at the International Conference of Working Women in Copenhagen, influential German socialist politician Clara Zetkin proposed that a day be set aside in every country where women can organize and advocate for their demands for social equality. The following year, Austria, Denmark, Germany and Switzerland celebrated International Women’s Day on March 19th, 1911. About 1 million men and women attended rallies in those countries and others to advocate for equal rights and pay.
END_OF_DOCUMENT_TOKEN_TO_BE_REPLACED